The Autobiography of the Flying Fysh (Book II)

Sir Hudson Fysh’s Qantas at War Book is the story of this great Australian airline, its partners and rivals-during the dramatic and colourful years from 1934 to 1945.

After Qantas and Imperial Airways had started Australia’s first international service in 1934, the book’s most romantic chapter’s deal with the flying boat service to London in 1938 and 1939. Sir Hudson Fysh writes with nostalgic affection of these over or, when they needed relaxation, could play clock golf in mid-air.

But no sooner had the flying boats got going then World War II broke out, and then whenever anything big happened in the Pacific-Singapore, Java, Darwin, Broome, New Guinea-Qantas was in the thick of it.

The difficulties of Imperial Airways in London, the start of the TEAL trans-Tasman service and the service to Portuguese Timor, the re-establishment of the international service with Catalina’s across the Indian Ocean, the hectic days of completion between the big airlines when the war ended and the modern era began.

Be the first to review “Qantas at War Book” Cancel reply 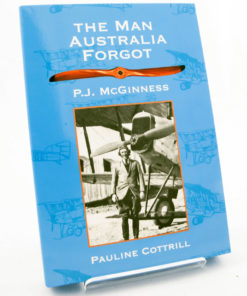